What is Drip Irrigation and How Does it Work? 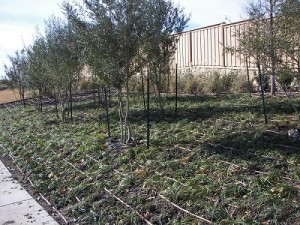 Right now, many cities within our service area are in Winter Stage 3 watering restrictions.  For most municipalities, that means watering either once a week or once every two weeks.  Last summer, we were also in Stage 3, only allowed to water once a week.  Lakes that supply our potable water (used for drinking, washing and watering) are drastically low, and it is quite possible that we will enter into Stage 4 watering this summer.  Stage 4 is no watering at all!

However, there is another option – Drip Irrigation.  When watering restrictions are in place, most cities will permit the use of drip irrigation when aboveground watering is not permitted.  Example – the City of Plano allows the use of drip irrigation to water foundations and landscaping (including grass, shrubs and trees) for up to two hours any day.  So when you can only water once a week with the sprinkler heads, or not at all, having drip irrigation will allow you to water more often, protecting your foundation and landscaping.

What is Drip Irrigation?  Drip irrigation was first developed in the mid-1960s and it has been used in landscaping since the mid-1980s in North America.  It has even been field tested at the Center for Irrigation Technology in Fresno, California since 1989.  Basically, drip irrigation consists of a series of tubes with holes and emitters that allow the water to drip slowly to the roots of plants, either onto the soil surface or directly onto the root zone.  Drip irrigation can be located on top of the soil, buried below a layer of mulch or buried four to eight inches below the surface.

Why switch to or add Drip Irrigation?  By using drip irrigation, you can water your foundation and plants and flowers, almost unrestricted, during watering restrictions.  No more worrying about new cracks in your foundation.  No more worrying about whether or not your newly planted begonias will survive the harsh Texas summers.  No more hassle with dragging the hose out in the early morning hours to hand water your landscaping.  Cities allow the use of drip irrigation more often than aboveground spray heads because it uses less water and saves water too…which means you save money!  When the water is applied directly to the soil, there is less evaporation and runoff and the water is applied more accurately.

Drip irrigation will soon be the norm for watering foundations and landscaping.  It is something that if done right the first time with the right materials and workmanship will operate correctly and last a long time.  In the long run, it is worth hiring a professional to come to your house for an hour to go over your options for drip irrigation as well as educate you in how it would work best on your property to maximize the use of your water.