What to Do If a Sprinkler Head Won’t Go Down? 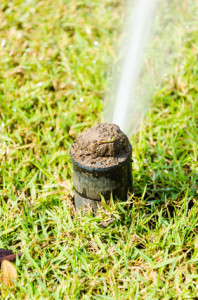 So today is your watering day.  You have set your sprinkler system to run during the nighttime hours because you know that is best.  You wake up in the morning wondering if the sprinkler system worked.  You look outside and yup, it worked, fewf!  How did you know it worked?  Was it the water droplets on your grass?  The wet look of the walkway?  Nope and nope.  It was because the sprinkler heads were still sticking up!

When your sprinkler heads (one, several or all) stay up and won’t go down after a specific zone is finished watering or after the sprinkler system has turned off, something isn’t working properly.  No need to worry…it’s typically a quick and easy fix!

The Most Common Reason for Relatively NEW Sprinkler Heads to not go down is that there is dirt or debris caught inside the sprinkler head.  Dirt, grass clippings, leaf pieces, and small rocks can become lodged in the small space between the pop-up nozzle and the body of the sprinkler.

How to clean out a sprinkler head yourself…

The Most Common Reason for OLDER Sprinkler Heads to not go down is that they are just simply worn out.  As we get older, there are things that we just can’t do as we did when we were younger.  Same goes with sprinkler heads.  If after cleaning the sprinkler head it still does not go down on its own, it’s time to replace the sprinkler head.  This is a slightly more complicated process than the cleaning.

How to change a sprinkler head yourself…

Please keep in mind that if at any point you do not feel comfortable cleaning or replacing a sprinkler head, please do not hesitate to contact a licensed professional for help.  We would be more than happy to help you!