What is Backflow, Backflow Prevention and Plano Sprinkler Repair? 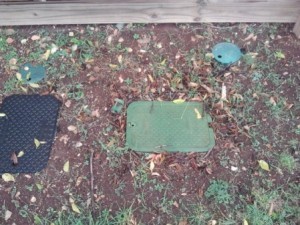 In our north Texas service area, water for residential sprinkler systems is supplied by the city’s potable water (drinking water) supply lines.  The sprinkler system is connected to the main water line on the customer’s side of the water meter.  Typically the water meter is located in the parkway, between the sidewalk and the curb.  It has a black circular lid that is flush with the surface of the ground and the meter itself is located below the ground.  At least three feet away from the water meter (a distance required by most cities) is a backflow prevention device which connects the sprinkler system to the main water line.  This is also located below the ground and it has a rectangular green lid.

The double check assembly (some homeowners may refer to it as a control valve), has two spring-loaded check valve assemblies to protect against backflow.  It also has two shut-off valves, one on either side of the check valves.  It is important to know where this device is located as this is how a homeowner would turn off their sprinkler system if there were an emergency and the system will not turn off at the controller.  It is common for the lid covering the double check to become overgrown with grass.  If this is the case, simply use a shovel or screwdriver to poke around in the vicinity of the water meter to find the lid.  To help with the search, compare where the water meter and double check is located on neighbors’ properties.  Most often they’re all set up in the same way.

When it comes to sprinkler repair, if a component of a double check assembly is broken, it is typically the handles of the shut-off valves.  As with anything metal in the ground, it will rust.  And the older it is, the rustier it will get.  If the handles are rusty or they are very difficult to turn, do not turn them.  Shut-off valves can freeze open, or worse yet freeze closed, never to be opened again.  Call a Plano sprinkler repair company or a McKinney sprinkler repair company to have the double check closed to stop water flow.  Replacing a double check assembly is typically more practical that repairing one; however, it is a very costly repair.  It is significantly cheaper, faster and easier to install a polyvinyl chloride (PVC) ball valve down from the double check to turn the water supply on and off.  This will never rust and is easy to use.